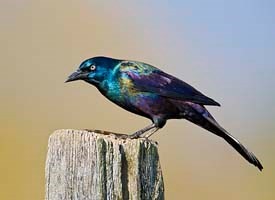 I have written many blogs about the wonderful birds you can see in Georgia only during migrations, such as Rose-Breasted Grosbeaks, Baltimore Orioles, and beautiful neo-tropical warblers. This blog, however, is not about a few eye-catching migrants, but about the wonderment of seeing even very common birds migrating in large numbers.

Several weeks ago I was at my son’s house in Dallas, Ga., when I heard a loud cacophony of birds in the trees around the house. I went outside to investigate. Fliting in and out of the trees were hundreds of Common Grackles Common Grackles can be found year-round in Georgia, but for many states they are only summer visitors and migrate to warmer southern states for the winter. It is common for them to migrate in very large numbers. I read an account of a man who opened the front door of his house and became frightened by the sight of hundreds of Grackles on his lawn and those of his neighbors. Alfred Hitchcock, of course, is the reason for this irrational fear.

As I walked among these Grackle-filled trees in Dallas, I was beaming with the pleasure of being inside this twice-yearly phenomenon. The birds were fliting all around me, males and females easily discernible as the males are a very dark purplish-brown while the females are a lighter brown. The name “Grackle” is an onomatopoeia for this bird’s vocalizations—not a Grammy-winning sound.

You may have seen Common Grackles on the ground below your birdfeeder and dismissed them as crows. They are only about 3 in. shorter in length than Fish Crows, and if the sun is not shining directly on them, their feathers look all black. The easiest way to tell the difference is to look at their eyes. Grackles have yellow eyes while Crows have black eyes. As an English major in college, I read Amy Lowell’s wonderful poem, “Purple Grackles.”  At that time I had no personal experience with migrating Grackles or Grackles of any sort. I probably critiqued the poem with a pseudo intellectual phrase such as,“ Strong, vibrant, pastoral imagery.”

After my Dallas Grackle immersion, I reread “Purple Grackles.”  This is now a very different poem for me—I have connected with it on a visceral level, the only way a poem can be truly enjoyed.

Amy Lowell lived in Massachusetts, so saying goodbye to summer was a more difficult thing to do than it is for us. The poem relates seeing thousands of Grackles descend all around her during fall migration. She is delighted but saddened by the portent of the birds’ arrival. The poem is too long to reprint here, but an excerpt is demanded:

The grackles have come.

But they have gone.

A moment ago the oak was full of them,

They are not there now.

Not a speck of a black wing,

Not an eye-peep of a purple head.

The grackles have gone,

And I watch an Autumn storm

To an old, limp Summer

Laid down to die in the flower-beds.

All pictures courtesy of Cornell Labs