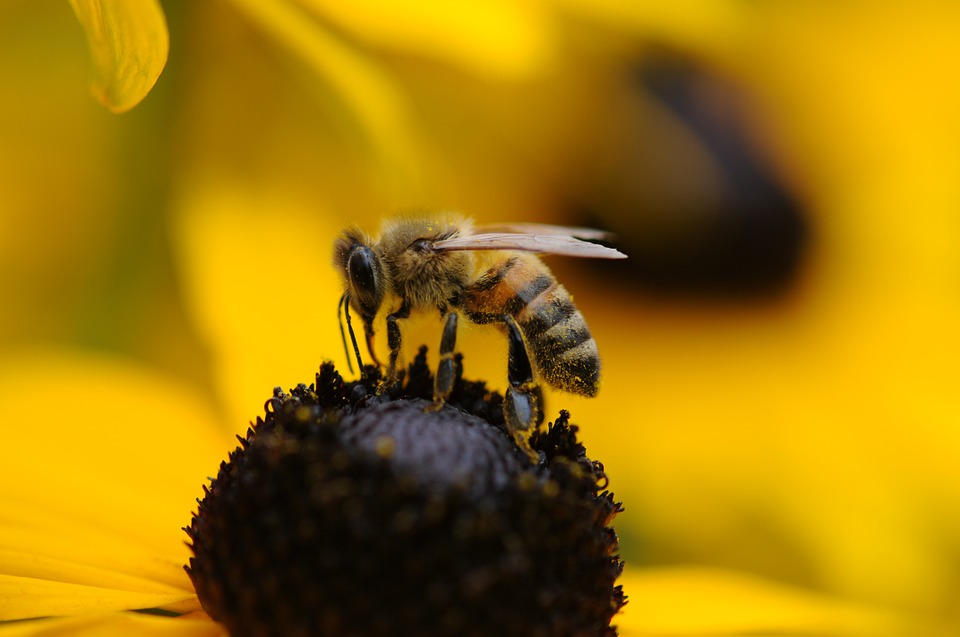 Recently this Smith Gilbert Botanical Gardens volunteer was investigating some plants near the Hiram Butler house, and some of the surrounding flowers were covered with what looked like 2 species or “types” of honey bees – both were foraging for pollen that the bees bring back to their respective hives to help feed the colony and its Queen…

It wasn’t until the mid-1600’s that scientists began to study and understand the important role honey bees play in helping to pollinate the world’s food sources (In the Bards’ great play Henry V, which  is part of his famous tetralogy and written in 1599, the Archbishop of Canterbury (mistakenly) talks about honey bees and their great King and Kingdom!).

It is estimated that every third bite of food a person puts in their mouth comes directly from a source that has been pollinated by a bee, butterfly, moth, fly or beetle.  Agriculture depends greatly on the honey bee for pollination, with honey bees accounting for approximately 80% of all commercial insect pollination in the US. Without pollination, there would be a significant decrease in the overall yield of fruits and vegetables throughout the world.

Honey bees are not the same as bumble bees, wasps and yellow jackets. The scientific name for the honey bee that lives in America is Apis Mellifera. Apis Mellifera actually means “honey carrying bee” and there are many different types or species and sub-species of known honey bees in the US like the German, Italian, Buckfast, Russian and others. Worldwide there are close to 20,000 bee species and North America is home to approximately 4000 of these fascinating creatures. Bees are closely related biologically to ants, wasps and hornets.

About 90% of bees worldwide are solitary in nature, with the remaining 10% being social and the honey bee colony is a good example of this socialization. A honey bee colony is made up of a highly organized society, with various bees having very specific roles within their lifetime – nurses, guards, grocers, housekeepers, construction workers, foragers, etc. In addition, all honeybees fall into three classes or castes: the queen bee, the worker bee and the drone bee.  There is only one queen bee per colony, with the vast majority of a colony’s bee population being made up of worker bees, which are all female. The lowly drone bee is male and is only in the colony to help impregnate the queen…once the queen becomes fertile and the colony starts to feel the beginnings of autumn, the drone bees are “kicked out” of the hive and left to die. Honey bees use pollen as a main food source.  Pollen is the male germ cells produced by all flowering plants and trees for fertilization and plant embryo formation. Pollen is made up of 35% proteins and is one of the richest and purest of Nature’s foods. According to the USDA, a honey bee colony typically collect 66 lbs of pollen per year and each colony has on average a population of 50-60,000 bees.

Below are some interesting facts about honey bees from the USDA:

*They are not native to the US. They were brought to North America by early settlers from Europe.

*They are not aggressive by nature and will not sting a person unless provoked or protecting their hive.

*They produce honey and because of this, honey bees are the only insect that is raised commercially for food and medicine by humans in the US.

*Honey is the only natural food in the world that does not spoil or rot, thus no need for preservatives or freezing – eatable honey has been found in jars over 4000 years old in mummified tombs.

* The honey bee’s wings beat at an incredibly fast rate – about 200 beats per second or 12,000 beats per minute – thus producing their distinctive buzz. A honey bee can fly for up to six miles at a rate of 15 miles per hour.

*A worker bee in the summer lives about six to eight weeks…wearing out their wings is the most common cause of their death, besides interactions with humans.

* The average worker bee produces about 1/12th teaspoon of honey in her lifetime.

*A honey bee visits 50 to 100 flowers during a typical pollen collection trip.

*It would take one ounce of honey to fuel a bee’s flight around the world.

Honey is used by honey bees for food all year long. There are many types, colors and flavors of honey because honey bees “visit” a wide variety of nectar sources. Honey is made from the nectar collected from flowers and trees. Honey bees collect pollen and nectar in the spring and summer when most flowers and plants are in bloom. They use their long, tube like tongues (called proboscis) like straws to suck the nectar out of the flowers and they store it in their stomachs and carry it to the beehive. While inside the bee’s stomach, the nectar mixes with the proteins and enzymes produced by the bees, converting the nectar into honey. When the bees arrive back at the hive, they drop the honey into the beeswax comb, which are hexagonal cells made of wax produced by the bees, and repeat the process until the combs are full. To prepare for long-term storage, the bees fan their wings to evaporate and thicken the honey. When this is done, the bees cap the honeycomb with wax and move on to the next empty comb, starting the process all over again. So, in a nutshell, the honey we eat is flower nectar that honey bees have collected, regurgitated and dehydrated to enhance its nutritional properties.

So the next time you see a typically small black, yellow striped bee on a flower, remember they are hard at work helping to pollinate the world…

Trivia Question…What vegetable is the only one grown commercially in the world that can’t be frozen?

Lettuce is the only commercially produced veggie in the world that can’t be frozen because when thawed it turns into mush.