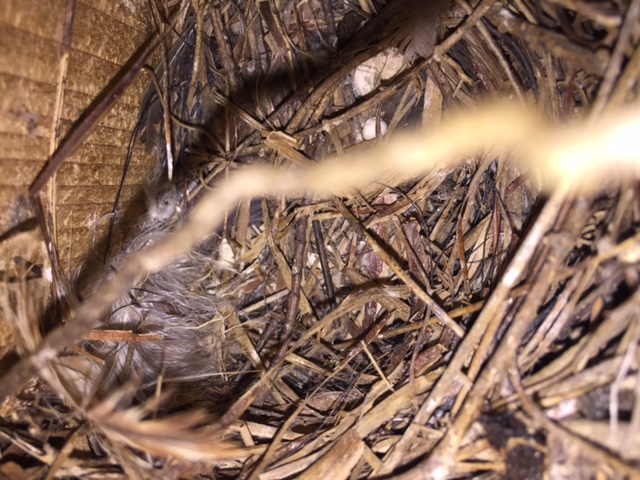 Empty nest. Yes, the house wrens have fledged. We’ve had two nestings of house wrens in our Smith-Gilbert Gardens bluebird box. No bluebirds this year. Because of the hot temperatures, there will probably not be any more nestings this year. It’s hot outside and hotter in that box. I will still check for the next couple of weeks just in case.

Why did we have house wrens instead of bluebirds? There are several possibilities or it could be a combination of them:

1) There are no bluebirds in the area.

2) The location of the house is not positioned exactly how bluebirds like it. Bluebirds like open fields with some kind of a perch about 10 feet in front of the house. This could be a bush, a small tree, a fence, pretty much anything they can stop on to make sure it is safe before they enter the box. The fledglings also use it when they first leave the nest. We attached a branch that had fallen off a tree to a piece of rebar that was pounded into the ground to stand it up. There is a brushy area with a large tree about 6 feet behind the house too.

3) House wrens are more aggressive than bluebirds and they won the house that way. If a bluebird (or any other bird) built a nest and laid eggs and a house wren wanted that nesting location, the house wren might peck holes in the eggs. We know that didn’t happen because there were never any bluebird (or chickadee) eggs in the house.

We know there are bluebirds in the area, we have seen them. If you remember they were the first to start a nest in the box way back in March. Then chickadees started building with moss on top of the bluebirds’ pine straw. But soon after the chickadees started, twigs appeared indicating the wrens. It looks like it was number 3 above or a combination of numbers 2 & 3.

This winter we are going to move the box away from the tree and brush that are behind it to see how that affects nesting next year. If we can get funding, we may put up a second box too to see if that helps. Because the house wrens are so aggressive they may take over the box no matter where it is, but if we have more than one box, maybe we will be able to have bluebirds in the second box.