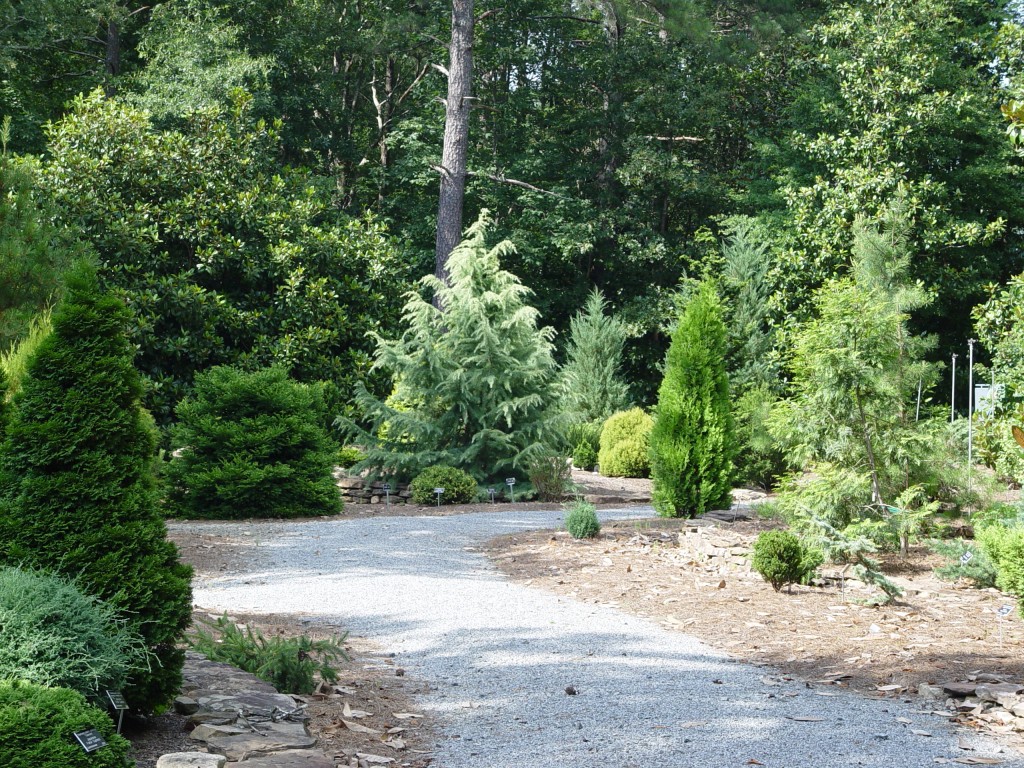 Smith-Gilbert Gardens (SGG) offers the visitor a large variety of conifers with many different wonderful species for all to see and enjoy. The SGG is home to 230 conifers representing 26 genera. One of twelve American Conifer Society member gardens in the southeastern U.S., and designated an ACS Reference Garden, the Conifer Garden at SGG is truly a unique and beautiful place to visit. Reference gardens offer “plant professionals and home gardeners an opportunity to evaluate conifers growing in a landscape or garden setting within their geographic region”. Created in 2002, the SGG Conifer Garden features selections that are suitable for growing in the southeastern U.S, as well as many rare examples from around the world. The identification signs located by many of the plants throughout the gardens give the botanical name and the year in which the plant was installed.  These signs help the novice and expert alike in identifying the over 3,000 species of plants located on the 16 acres that comprise SGG.

The Webster Dictionary defines conifers as “any of various gymnosperms that bear their reproductive structures in cones and belong to the phylum Coniferophyta”. Conifers evolved around 310 million years ago and, as a group, show many adaptations to drier and cooler environments. Most coniferous trees grow in the northern hemisphere where they form forests. These trees grow wild across many areas in North America, Europe and Asia. Some grow in the Southern Hemisphere in places such New Zealand and Chile and are adapted to survive the cold weather and acidic soils found in these locations.

Conifers are one of the most varied and widely spread classes of native tree species in North America.  Adapted to many different environments, conifers like pine trees are hardy survivors in their native habitat.  Historically, the pine trees of North America were used by Native Americans for treatments of respiratory ailments, in canoe building and even as food.  Today native pines are one of the most valuable commercial timber sources and continue to be used for construction, furniture, pulpwood, land management and power generation. Conifers are usually evergreen and often have drought resistant leaves that are needle shaped or scale like. They depend on the wind to blow pollen produced by male cones to female cones, where fertilization takes place and seeds develop. In addition, certain bees and beetles help in the overall pollination process. There over 600 species of Conifers, including pines, firs, spruces, hemlocks, cypresses, junipers, yews, and redwoods located throughout the plant world – not all evergreens are Conifers (think hollies and rhododendrons), and not all Conifers are evergreen (think bald cypress).

According to botanists from the University of Birmingham, fossil records show that Conifers originated in Europe and North America during the Paleozoic period approximately 310 million years ago.  During this time in history, fossils have shown that several groups of conifers are recognizable with the modern conifer families of today.  The underlying evolutionary history of Conifers remains obscure, as do the evolutionary relationships between different conifer groups.

Conifers are some of the most diverse, interesting and beautiful trees in the world.  The taxonomic diversity of Conifers over the course of 310 million years, has allowed these trees to adapt and survive geological and climatic extremes, as well as competition from flowering plants. Conifers, with 627 known species worldwide, grow on every continent except Antarctica… A Natural History of Conifers, by Aljos Farjon, offers a detailed account on Conifers and is a great reference source. Conifers come in a wide range of sizes, shapes and colors. The world’s tallest Conifer is the coast redwood (Sequoia sempervirens), and the oldest Conifer is a bristlecone pine (Pinus longaeva). Many Coniferous trees possess characteristics that easily identify them as Conifers as is noted below.

Coniferous trees do not produce flowers, but grow cones to hold their seeds. Many of these trees produce both male, pollen-bearing cones, as well as female, seed-bearing cones. Both types of cones appear on the same plant – this is known as a monoecious type plant.  The male cones do not last as long as the female cones. Yews and junipers are the exception to the woody cones that most Conifers produce. These two varieties produce berry-like structures, which contain their seeds. They are known as dioecious type plants – this means they grow into separate male and female plants.

The leaves of most coniferous trees resemble needles (although there are broadleafed conifers such as ginkgo). The needles normally stay on the tree year-round, producing evergreen color. Both larches and cypresses are exceptions, being deciduous where they lose their needles each year. Conifer needles protect themselves with a waxy outer coat, which stops moisture evaporation from freezing temperatures. The flexible needles allow snow and ice to slide off the branches.

The leaves provide the key to identifying coniferous trees. Single needles spaced out on the branches indicate that the tree is a fir or a spruce tree. Needles appearing in bundles belong to pine trees, while clustered needles are found on larch trees. Straight needles with a feather-like shape grow on yew trees. Awl-shaped (triangular) and scale-like needles are found on juniper and cedar trees.

The State of Georgia has approximately 250 native species of trees, with over 50 types of native conifers growing in the State.  Because of the various topographical and climactic areas, the location of trees and also the densities of each species are varied all over Georgia – the Smith Gilbert Gardens offers the visitor the unique ability to see not only many of the Conifers native to the state of Georgia, but also many different species of conifers from around the world.