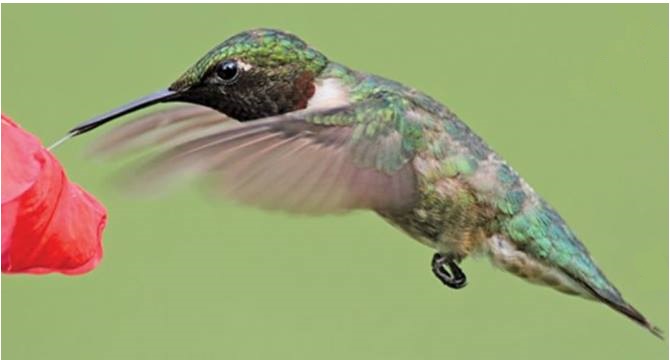 Today, October 13, 2020, I took my hummingbird feeder down, washed it, and put it away until next year. It had been five days since I last saw my two little visitors.

I have been putting out nectar for hummingbirds for many years, but this year was different. My feeder hung just outside a bay window where I could easily watch the hummingbirds feed as I sat at my kitchen table. The feeder, the window, the table were all the same as they have been, but the difference was me in that scene.

Because of the Covid-19 pandemic, I was home a lot, taking almost all my meals at that table. I put my feeder up in April when my hummingbirds usually arrive. They did not disappoint.

In years past, when I was out of the house more often, my hummingbird watching was quick and sporadic, “Oh look, a hummingbird is at the feeder!”  Then I would move away to do other things, so many other things.

This year all those so many other things went away. I was home alone much of the time. I began to intently watch my feeder. I noticed two hummingbirds, a male and a female, came very regularly. I liked to imagine that they were raising a family, and my feeder was helping them to do that.

As I continued to watch them, they took on distinctly different personalities. The male was all business when he came. He landed on the circular bar, drank deeply several times, then flew away. The female would land, but before she drank she would look all around as if she was checking for any danger that might befall her while her head was down, If it looked safe, she would then drink deeply. After drinking, she would just sit quietly for a while. Sometimes she would do a sort of hula dance before she flew away. This always made me smile, so she kept doing her dance for me.

This little routine of ours continued through April, May, June, July, August, and then in September their visits increased. They were coming in to feed, alternately, almost every ten or fifteen minutes. I knew what they were doing, getting fat in order to survive their arduous journey to Central America for the winter.

I continued to watch knowing our time together was coming to an end. On October 8th, they didn’t come nor on any day thereafter. I had never experienced sadness at this inevitable outcome before, but then I had never known any other hummingbirds as I had gotten to know these two.

You might think I would have named them, but I didn’t. Whether I thought naming them would have made our parting even more difficult, or, perhaps, by naming them I would have diminished their exotic wildness, I don’t know. I just know that right now I am sad, but I will look forward to whatever April 2021 will bring.