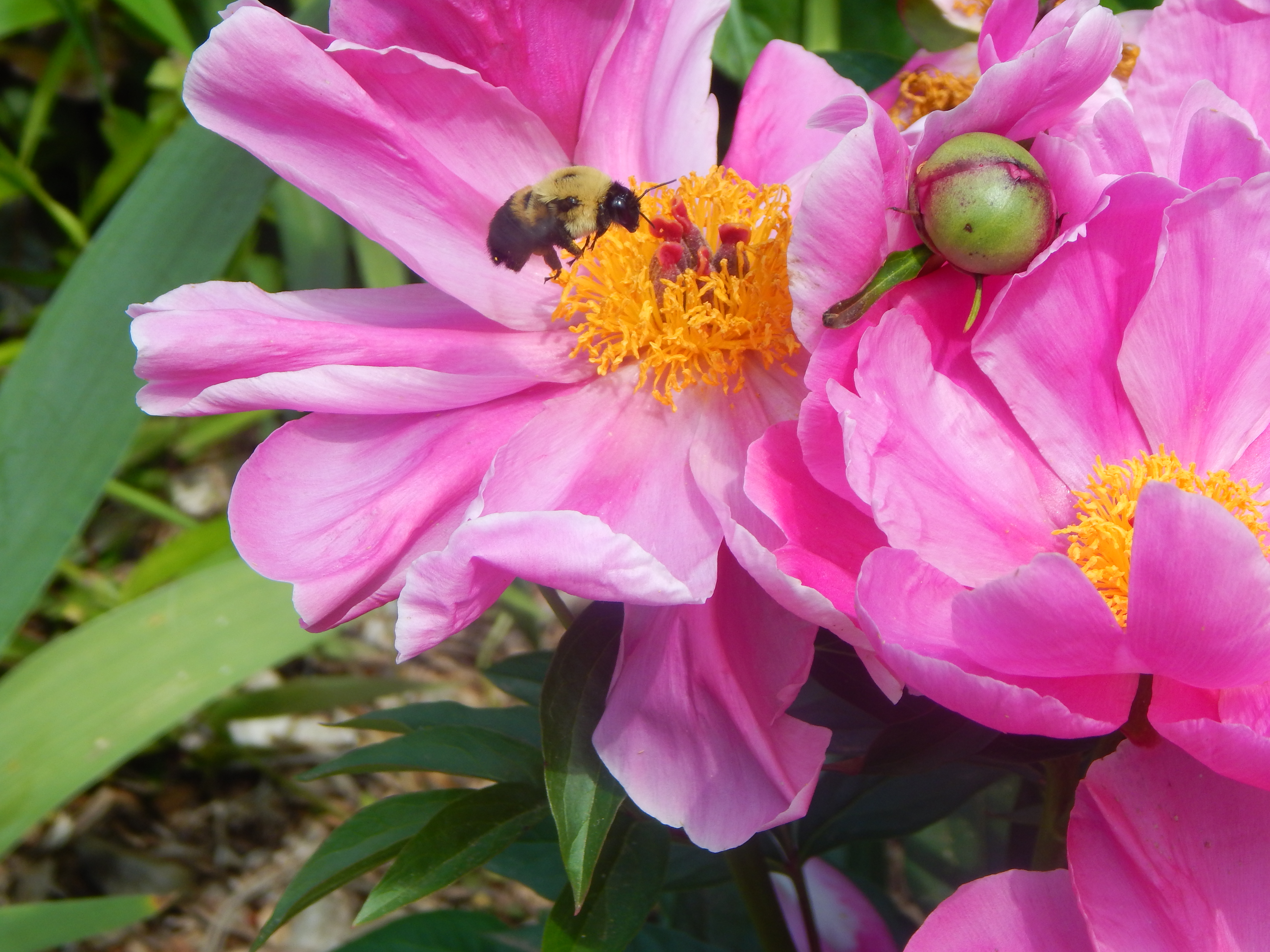 Bees are the most important class of pollinator.

During the March/April time frame in Atlanta, the “yellow stuff” that accumulates on our cars in the Smith Gilbert parking lots, and makes most of us Atlantans have runny noses and watery eyes is pollen that is falling from lots of different specie of trees and shrubs, but mainly from the Georgia pines. The state of Georgia has approximately 250 different species of trees, with 50 species being pines and other members of the Conifer family.

Coniferous trees do not produce flowers but grow cones to hold their seeds. Many of these trees produce both male, pollen-bearing cones, as well as female, seed-bearing cones. Both types of cones appear on the same plant – this is known as a monoecious type plant.  The male cones do not last as long as the female cones. Yews and junipers are the exception to the woody cones that most Conifers produce. These two varieties produce berry-like structures, which contain their seeds. They are known as dioecious type plants – this means they grow into separate male and female plants. Conifers rely on wind, rather than pollinator insects, to transfer pollen – that’s why we see so much of it this time of year.

Native bees, wasps, flies, beetles, and many other insects keep Georgia’s forests, fields, farms and watersheds alive and healthy.. Native bees are vital for pollination of most Georgia fruit and vegetable crops including two of the state’s most valuable fruits, blueberries and watermelons, but also for most of the wildflowers, shrubs, and trees that protect our watersheds and provide food and shelter for lots of other wildlife. Flies, wasps, beetles, butterflies, and moths are also important pollinators, but native bees are especially effective crop pollinators for a variety of reasons.

Georgia has more than 500 native bee specie, the vast majority of which are solitary in nature. This means a single female, once she mates, will make and provision her nest alone, rather than in a colony as the honeybee does.

The Importance of Pollinators

Pollination is the transfer of pollen from the male parts of a flower to the female parts of the same or a different flower. This is necessary for the production of seed and fruit in many crops. A 2014 economic impact study by the University of Georgia determined that the annual value of pollination in Georgia is over $360 million. While many insects such as flies, beetles, moths, butterflies and wasps can be important pollinators, bees outperform them all because of their dietary need for pollen and nectar, their hairy bodies that carry pollen grains easily and their rapid flight from flower to flower. Species such as bumble bees and honey bees can be managed on a large scale suitable for the high acreage pollination demands of modern agriculture.

As important as managed bees are for pollination, the services provided for free by unmanaged, wild bees are at least equally as valuable. Pollination is an ecosystem service, a gift from nature, with economic returns similar to rainfall or soil fertility; therefore, pollinators require proactive stewardship from all Georgia stakeholders, including beekeepers, farmers, foresters, land managers, homeowners, pest control operators and applicators. COLLECTIVELY we can help the honey bees in Georgia….

PLEASE REMEMBER THAT MOST MOSQUITO CONTROL PROGRAMS KILL MOSQUTIOS AND THEIR LAVAE BUT MAY INDISCRIMINALTY ALSO KILL BEES, MOTHS, BUTTERFLIES ETC in the process….please make sure your pest control company is using biodegradable controls and methods for mosquito control…

Pollination is the act of transferring pollen grains from the male anther of a flower to the female stigma. The goal of every living organism, including plants, is to create offspring for the next generation. One of the ways that plants can produce offspring is by making seeds. Seeds contain the genetic information to produce a new plant.

Pollination is usually the unintended consequence of an animal’s activity on a flower. The pollinator is often eating or collecting pollen for its protein and other nutritional characteristics or it is sipping nectar from the flower when pollen grains attach themselves to the animal’s body. When the animal visits another flower for the same reason, pollen can fall off onto the flower’s stigma and may result in successful reproduction of the flower.

* The average worker bee produces about 1/12th teaspoon of honey in her lifetime.

*A honey bee visits 50 to 100 flowers during a typical pollen collection trip.